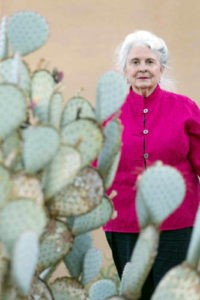 It was a beautiful sunny desert morning when I drove into a quirky mobile home park in Rancho Mirage, California, where I was about to interview the critically acclaimed American conceptual artist, painter and sculptor, Pat Lasch. She belongs to a first generation of feminist artists whose work gained prominence in the United States.

Lasch creates seemingly ordinary objects in extraordinary ways, often from stitched-together components made from dried acrylic paint. Since she is the daughter of a German-born pastry chef, many of her works portray intricate wedding cakes of various sizes and bridal dresses all made with polymer acrylic paint that she either pours, extrudes or presses into molds. Her feminist viewpoints emerged early. Her father taught her the pastry business, and he believed strongly that she could do anything a man could do without restrictions. She also recognized the importance of cakemaking in relation to the occasions that mark the significant periods of one’s life – birthdays and weddings for example – and she brought this to her art. This included her making a series of black cakes because “no one makes us cake when we die.” When asked why she didn’t become a chef, she chuckled, “I was allergic to flour.”

Born in Manhattan, Lasch lived a younger life of extremes. Her father retired early and moved the family to a 47-acre farm in upstate New York, where she lived the life of a country girl. But when she turned 13, he moved the family back to New York City, where he reopened his pastry business. Moving from quiet country life to a raucous junior high school in New York was quite a shock for the young teen.

Lasch proved to be resilient in many ways. From age four on, she knew that she wanted to be an artist. Her artistic talent was recognized when she applied to and was accepted at the High School of Music and Art. A devout Catholic, Lasch would attend daily mass before catching four trains to school. Afterward, she worked every night in her parent’s business.

An early inspiration was her teacher, May Stevens, an American feminist, political artist, writer and educator. When her classmates voted Lasch into a student show, Stevens barred her because she deemed her work not fitting into the overall theme. “I was 14 and heartbroken,” said Lasch, “but it taught me a valuable lesson: You don’t always get included in the show.”

Lasch ultimately went on to earn a Bachelor of Arts from Queens College of the City University of New York. Bored at first with the required art courses and with some of her teachers, she questioned her direction.

She dropped out, got married, had a daughter, Melinda, and divorced when she was 23. She returned to school and had her first art class with Richard Serra (b. 1938,) an American artist involved in the Process Art Movement. Finally, she had found an exciting teacher and took every course he offered for the next two years, adopting his avant-garde way of thinking.

She was encouraged by many teachers along the way, but Serra, with whom she eventually fell in love and had an affair, and the figurative sculptor Richard McDermott Miller (1922-2004) were the most influential on her artistic career.

Serra encouraged her to expand her world, giving her books to read such as “The Shape of Time” and other works that ranged from anthropology and philosophy to the “The Story of O.” While Lasch believes that Serra supported her work, she recalls a day he came to see her in her studio. Looking at her work, he said: “It’s good, but I told you not to do that, and you did it anyway.”  His remarks stung but did not stop her from moving forward. After that visit, he never returned to her studio again – and their affair ended.

When asked how this relates to her perspective of feminist artists, she said, “It reminds me of something Lee Krasner discussed in an interview. Married to Jackson Pollock, Krasner would often have to plead with her husband to visit her studio, but she never got her due. Similarly, Camille Claudel, a French sculptor and Auguste Rodin’s lover who contributed her talent to his work, died in obscurity. That’s what happened to women artists.” Lasch, by contrast, considers herself very lucky having had dealers who believed in her work and asked her to show with them.

“Serra once said to me, art isn’t psychology; it’s not about that.” But Lasch disagreed. “My work has always been very personal… art is about my internal feelings, my very personal feelings. My work is intricate and never finished all at once. It goes through numerous stages of drying time and therefore takes time to complete. It puts me into a place where nothing else matters, because I need to be in the moment… I need to be sensitive to the feel of what’s happening at that moment. I find the work works on me as much as I work on the work. It is a back and forth, like any relationship.”

In 1975 Lasch dated the composer Philip Glass. It was through Glass, who spoke fluent Tibetan and whom she found to be brilliant and exotic,  that she became involved in Tibetan Buddhism. Her relationship with Catholicism had become very complicated over the years, and she was yearning for a new spiritual connection.

She traveled to India to study with Lama Kalu Rimpoche and seek an audience with the Dalai Lama. At that time, she had been working on “tondos,” stretched muslin pieces that had been sewn with thousands of stitches. “I made a tiny muslin piece to give to the Lama, and he turned it over and over and then blew his nose in it,” she said. Lasch laughs, “He thought it was an embroidered handkerchief, and it certainly was a message to me – my first lesson about ego.”

Throughout her life she has attended several silent retreats, some two or three months long, and she learned walking meditation from Thich Nhat Hahn. Today she continues to practice some form of daily meditation. “Art and meditation,” she says, “have become the mainstays of my life, along with the occasional vodka.”

In 1982 Lasch met her second husband, Thomas Cerbu, when they both had won the Rome Prizes awarded by the American Academy in Rome. Cerbu is a Comparative Literature Professor who speaks over eight languages fluently.  She recalls the exact moment she fell in love with him: “It was nighttime, and we were walking up the steps from the Trastavere to the Janiculum where the Academy was located.”

No longer married, Lasch says: “Thomas was my rock for the eight-and-a-half years we were together, and I was devastated when our marriage ended.”

Today Lasch keeps busy between her three homes. Besides the desert, Lasch has a home in New York City and a home she built in the mountains of New York, a place she goes to “get off the grid,” to work, swim and “hang with the frogs and the dragonflies.”

She finds the desert to be a most amazing place and enjoys the quiet where she can focus on her work. When she was young, Lasch admits to wanting to be a star but today doesn’t care for the limelight as much.

Could she ever retire? While she has thought about it, it has not been in terms of not wanting to work. She recently suffered a fall, crushing her left hand and breaking two ribs, but she is on the mend using “mindfulness” to cope. While she has known many women artists who have worked to the end, Lasch realizes that things can sneak up on you and – one never knows.

An extraordinary talent, she has exhibited throughout her entire career, and her work can be found in the collections Smithsonian American Art Museum, the Museum of Modern Art and the permanent collection of the Metropolitan Museum of Art. In 2017, the Palm Springs Museum of Art staged “Journeys of the Heart,” a 43-year survey of her stellar oeuvre.

As an artist, she continues to push boundaries. At 75, Lasch believes she is a survivor and answers the question, “Can One Retire Creativity?” with a resounding “no.” Her advice to her young self is to be kind and stay focused. “I am who I am,” Lasch said. “You must be who you are, and you must honor that.”

Lasch will be part of an upcoming fall show in Los Angeles titled “With Pleasure: Pattern and Decoration in American Art 1972-1985” at the Museum of Contemporary Art (MOCA) on Grand Avenue, open to the public October 27, 2019 through May 11, 2020.

Judy Nemer Sklar is an artist and writer living in Palm Desert, California. See her full interview with Pat Lasch at www.artistsnarratives.com